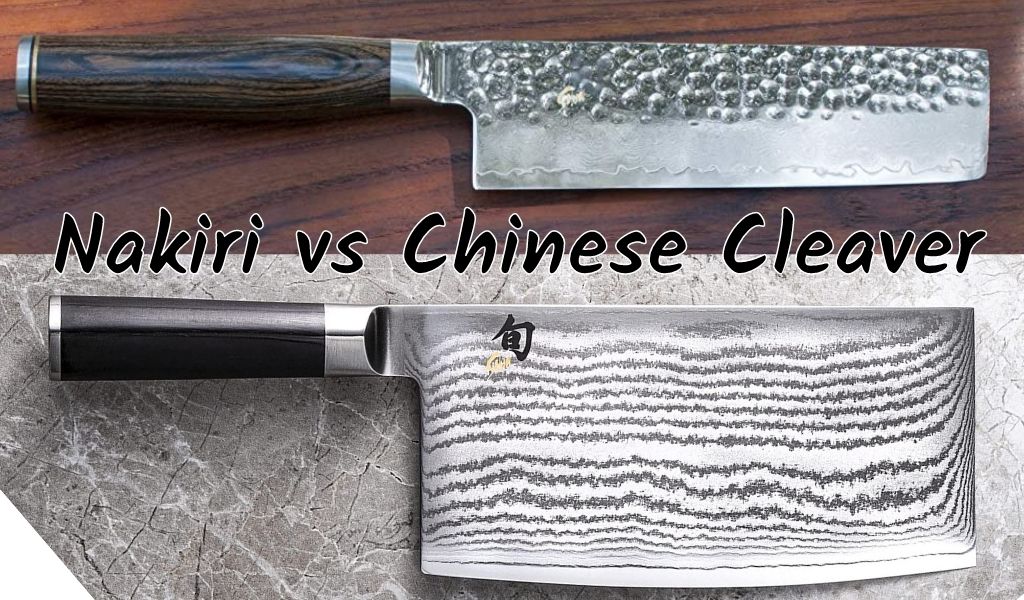 Over the last few years, we have seen an increase in the popularity of nakiri knives and Chinese-style vegetable cleavers. Both of these knives are perfect chopping tools. Though they both cut vegetables with similar ease, they do so very differently.

Let’s go through this Chinese vegetable cleaver vs nakiri to know more about the similarities and differences between these two knives. How to use it and which knife is better for your purpose.

If you are in hurry then before going through this whole nakiri vs Chinese cleaver comparison, you can go through this quick overview table.

What is a Chinese Cleaver Knife(Chinese Chef’s Knife)?

A Chinese cleaver, also known as a Chinese chef’s knife. This knife is classified as a general-purpose knife used in Chinese cuisine. It is used for tasks such as cutting meat, fish, and vegetables in the preparation of Chinese dishes.

This Chinese cleaver knife has a broad blade, similar to a butcher knife. In the West, it is frequently used as a substitute for a chef’s knife and to chop vegetables. Because in many cases, it is easier to handle than a chef’s knife.

It is a broad hacking knife with a square blade that can range from 6 to 15 inches (15 to 38 cm) long and 1 to 2 inches wide. The blade has a gentle arc that enables the user to rock the blade back and forth while chopping. That makes it easier to cut through tougher items like bones or frozen meat.

What is Nakiri Knife?

Nakiri knives are Japanese vegetable knives. They feature a very thin blade and come with a flat edge that usually curves a bit towards the end. This means that they’re not really made for cleaving through bones or cutting thick pieces of meat. Instead, they’re designed to cut soft things like vegetables and fruit. And for this quality, these knives are so popular in Japanese kitchens.

These knives can be used for lots of different types of food preparation, from chopping vegetables and slicing meat to mincing garlic. However, because of their shape and weight, some people might find them hard to use when preparing certain foods.

The shape of the nakiri was inspired by the Chinese Dao knife. Naka means middle in Japanese and ri means two in Japanese. So Nakiri literally means middle two – referring to the two cutting edges of the blade.

The history of Chinese cleaver is so deeply rooted in the culture and tradition of China. The Chinese vegetable cleaver has a long history. It bears thousands of years old history, which can be traced to the Shang Dynasty. This knife was used as a tool to cut meat but gradually evolved into a multipurpose kitchen knife in all aspects.

But despite these names’ difference from country to country, it can be explained by the origins of this blade.

The Nakiri knife originates from Japan and is the Japanese version of a vegetable cleaver. The history of the nakiri knife dates back to the 13th century when it was first used by gardeners and farmers.

The knife became popular in the home kitchen during the 17th century when it was used to prepare meals for samurai warriors. In modern times, nakiri knives are used for many cutting tasks in a variety of settings.

It was used in the kitchen for chopping vegetables into bite-size pieces. But it has evolved over the years to become popular throughout the world as a multipurpose knife. The word “Nakiri” translates to “knife for cutting vegetables” and is derived from the Japanese word “ kiru ” meaning “to cut.”

As mentioned in this Chinese chef’s knife vs nakiri review, the Nakiri knife is designed with a flat blade. That means it can be used like a kitchen cleaver or even a meat slicer.

You may have got a common idea about these two knives from this Chinese cleaver vs nakiri, now it’s time to know their differences. Otherwise, you can consider them as the same thing. Their differences are listed below:

The first major difference between a cleaver and Nakiri is their origin. The cleaver was developed in China, whereas the Nakiri originated in Japan. But nowadays both of the knives are manufactured worldwide,

Despite these two knives’ features the same shape, their surfaces are different. You will find round shapes dawn pattern on the half of the Nakiri knives, but the cleaver’s surface is plain.

Nakiri blade features different patter or Damascus pattern on it or sometimes it features hammered finish. Whereas, Chinese cleaver doesn’t have these patter. It features a plain mirror-finished balde.

You can identify a Nakiri by its wedge-shaped blade and its straight back. A vegetable cleaver, on the other hand, has a curved blade that is thicker at the tip than the handle, and it has a curved back. The two blades look very similar but they are shaped differently.

There are two different types of knives used for cutting certain types of food. A cleaver is longer than a Nakiri, but both have different size ranges. Therefore, one item of a size range may match the other type and length range.

Nakiri knives are made with a single-bevel blade. They are therefore not suited for chopping and mincing, but good for slicing, dicing, and chopping. But nowadays nakiri knives also feature double bevels as mentioned before in this Chinese vegetable cleaver vs nakiri review.

Chinese cleavers have a double-bevel blade; this makes them ideal for chopping and mincing.

The hardness of the blades is another thing that you have to consider. The Chinese cleaver has more edge complexity than the Nakiri’s. This makes it even more durable than the latter.

When it comes to the cleaver, you will find that it has a very different handle. The blade and handle are almost always one piece, but there are some cleavers with handles attached.

On the other hand, typically cleaver have rounded handles that is made of a smooth material. This allows for a comfortable grip and it is very important while you are using a lot of pressure. You will find handles made of different materials in both of the knives.

A Japanese Nakiri is more appropriate for long vegetables, whereas a Chinese cleaver is best for short veggies such as lemon, tomato, & other similar items.

We have gone through the difference between these two knives in this (Chinese cleaver) Chinese chef’s knife vs nakiri. Now, let’s talk about their similarities.

Common thing between these vegetable cleavers and Nakiri is that both are made of carbon steel. And all the raw materials used to manufacture are almost the same.

You won’t face any restriction in cutting if you use either a cleaver or a Nakiri. You can cut almost every fruit and vegetable with both of the knives. The main reason behind the fact is the Chinese & Japanese food habit, produced vegetables, & fruits are almost same.

You can often confuse a Nakiri and vegetable cleaver because of their similar design. Also, the manufacturers haven’t changed the design for both of them. They are usually made from metal with wood-like handles.

You should include that both vegetable knives are made of high-quality stainless steel. They can keep their sharpness for a long time.

The main difference between a meat cleaver and a Chinese cleaver is the thickness of the blade. Usually, Chinese cleavers have thinner backs on the blade than Western cleavers. This gives it the ability to be used as a multipurpose chef knife.

However, the blades of these cleavers will not be as thick or heavy as the thicker Chinese cleavers. This makes them less sturdy and able to cut through tougher ingredients.

As we mentioned earlier in this Chinese vegetable cleaver vs nakiri review, Chinese cleavers feature a flatter edge than a Western cleaver. This curve allows chefs to use a rocking motion or swinging motion to chop ingredients. The flat edge on the Chinese cleaver doesn’t allow that, but it does make it easier for users to get straighter and more precise cuts.

1. What is the best nakiri knife?

Shun Permier nakiri is one of the best nakiri knife. Shun has hundreds of years of the old history of knife making. and they are handcrafting their knives using traditional Japanese knife and sword-making techniques. There is other quality nakiri knife maker like miyabi, dalstrong, etc.

2. What is the best Chinese vegetable cleaver?

3. What is a nakiri knife used for?

A nakiri knife is a Japanese kitchen knife that is ideal for chopping up all different types of vegetables or mincing the smallest pieces of garlic. This type of knife has a straight edge blade and a blade length that tends to be longer than many other prep knives.

If you have gone through this whole Chinese vegetable cleaver vs nakiri then you must have got a good idea of these two knives. These two knives have their own unique pros and cons that make them both attractive options for anyone shopping for the best vegetable knife. Now it’s up to you to decide which type of knife is better for your purpose. 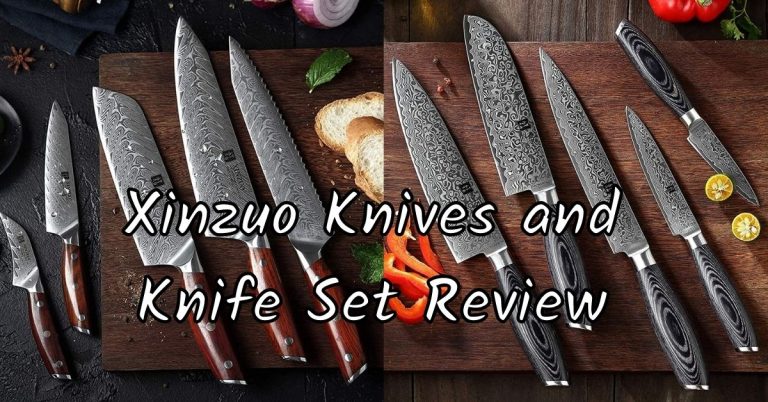 A good knife is one of the most important tools in any kitchen. But with so many options on the… 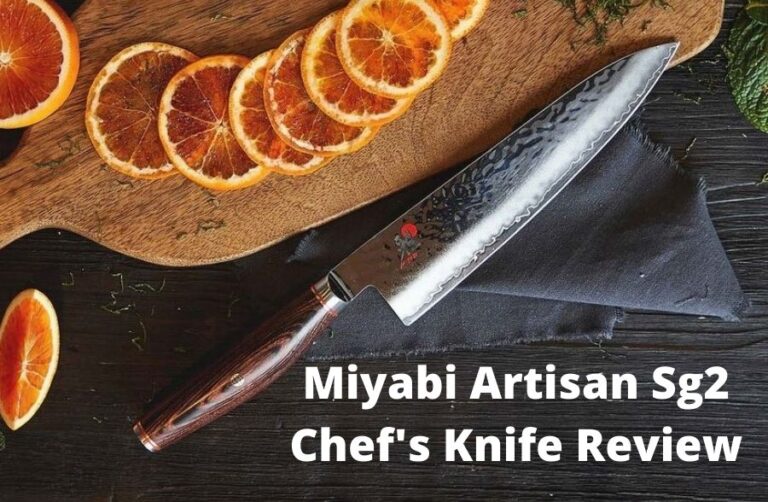 The Japanese knifemaker Miyabi started their journey in Seki, Japan . The city, which is known as the Japanese sword… 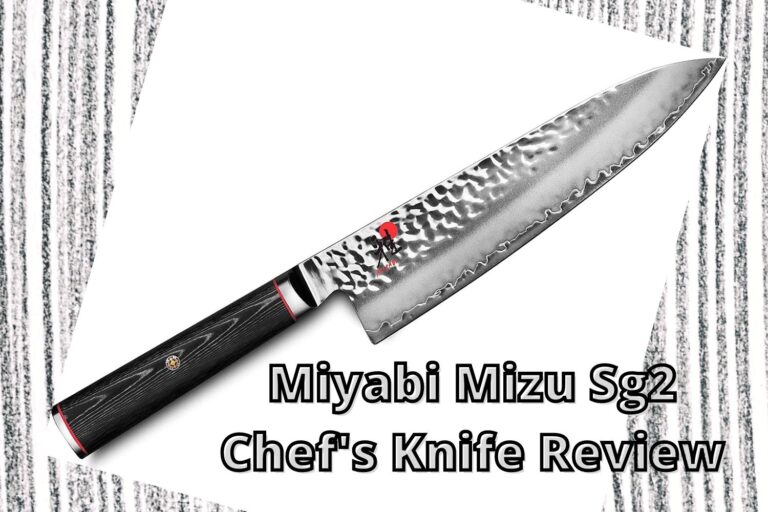 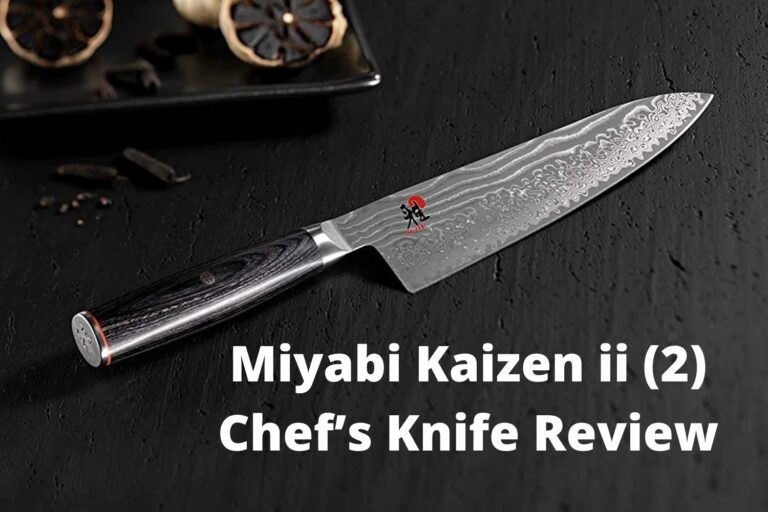 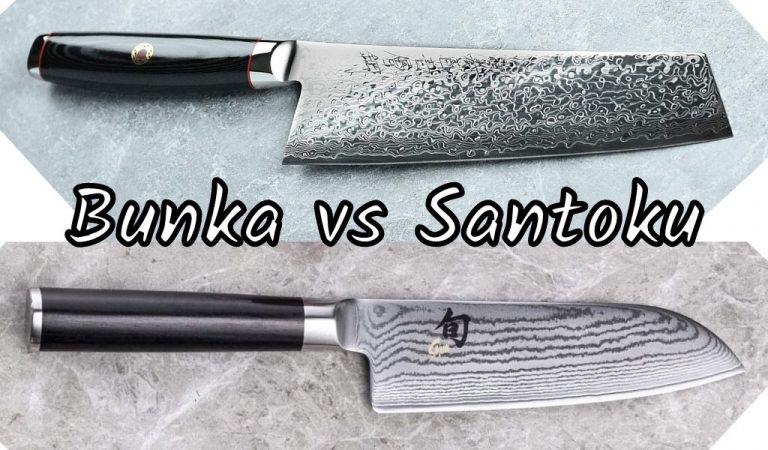 Knives are an essential part of any kitchen, and there are many different types to choose from. The most popular… 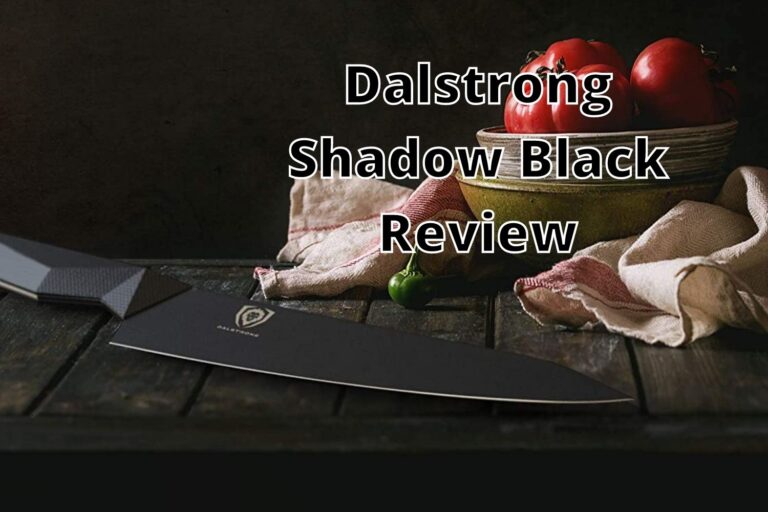 Dalstrong shadow black, one of the unique and latest collections of Dalstrong. With the exceptional futuristic design, this knife can…